Cavitation is a physical process that causes pitting of surface due to rise in local pressure by collapse of vapour bubbles. Cavitation can damage the concrete in following ways:

Cavitation generally occurs in hydraulic channel and pipe where flow velocity is high -typically over 10 m/s at normal temperature and pressure. The high speed liquid creates zone of sub-atmospheric pressure resulting in the formation of vapour pockets. These vapour bubbles eventually collapses (implosion) and gives impact load on the concrete surface.

The pressure can be as high as several hundred MPa due to such implosion of bubbles. The continual effect may eventually loosen the concrete surface. The flow disturbance will worsen the effect of cavitation and accelerate the rate of damage. While a large portion of the concrete is damaged, the cavitation effect gradually decreases.

is the radius of bubble before collapse. The velocity of jet can be as high as 4000 m/s and induces stress due to impact as shown in figure below.

For pit formation and its growth two criteria should be met viz. (a) the stress level should be high enough and (b) the duration of shock wave produced due to the collapse of bubble should be long enough to penetrate the existing cracks. For a rectangular pulse this criterion are represented by:

is Young’s modulus of elasticity ,

is the velocity of longitudinal wave in the target material and

is the length of preexisting crack.

The rate of erosion is shown in figure below as presented in the study by Morbar. 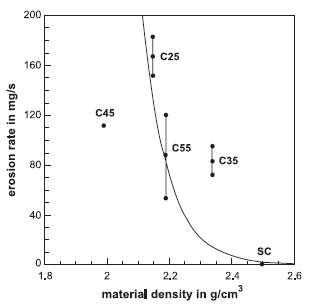 Cavitation can be prevented by considering flowing in the design:

This site uses Akismet to reduce spam. Learn how your comment data is processed.