Permeability is similar to a chain reaction. It is necessary to have a permeable concrete at start to let chemical ingress into it and attack its constituents (mainly CSH gel). Once the chemical attack starts, the permeable medium helps to leach out the products of reaction and provides passage for inflow of more water and chemicals.

In an experiment done by Kyung Joon Shin (2017), they found that permeability increases exponentially with increase in crack width. This is simply due to the fact that, headloss in the larger cracks is much lower than in smaller cracks.

Permeability is defined as the measure of the concrete’s ability to pass gas or liquid though it.  This property is of prominent importance for water retaining structures and also for durability against chemical attack. The Darcy’s equation holds good to measure the permeability coefficient (k) given as

h is the drop of hydraulic head over length L

Generally transport of water though concrete occurs by cracks and capillary pores. Smaller size pores in the range of nano-meters are less responsible for permeability.  The formation of capillary pores in turn depends on the water cement ratio of the concrete, thus there is measurable relation between coefficient of permeability and w/c ratio as shown in figure below.

During the initial hardening phase of concrete when the Alite and Belite are undergoing hardening reactions, the capillary pores are gradually decreased and thus there is gradual decrease in the permeability. The hydration products occupy double the space of the original solid constituents. Thus, for higher w/c ratio, the voids are not filled completely resulting in higher permeability. However, with the increase in age of concrete the permeability may increases.

At the lower stress level (compression stress), the permeability decreases due to closing of gaps and possible reduction in path of interconnected pores. But as the stress becomes high and reaches near its ultimate strength, the permeability increases, this is due to the formation of micro cracks (Marta Choinska et.al 2007). 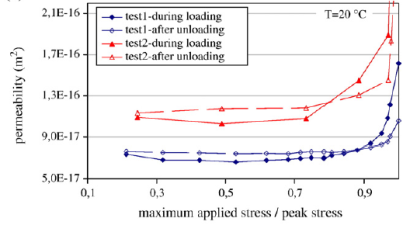 Permeability of concrete during service life

Currently I am not sure about the change in permeability with time. I will post about it in later dates.

This site uses Akismet to reduce spam. Learn how your comment data is processed.